skip to main | skip to sidebar

Looking at the bright side

I suppose this reflects a somewhat completely skewed view of the world, but when I saw this headline on CNN.com tonight, my first thought was: Well, at least there's a chance they'll be alive the next time my Baltimore Orioles win a World Series. A chance.
Posted by Your escalator operator at 7:54 PM 31 COMMENTS

A mere seven years after instituting a program that would eventually issue 180,000 traffic tickets to motorists who drove through red lights - outrageously expensive tickets that, in a hilarious little twist, it now turns out, weren't the kind of traffic tickets that you actually have to pay - the Los Angeles City Council voted unanimously today to discontinue the initiative.

After only seven years and 180,000 tickets. That L.A. City Council is one agile little decision-making legislative body, ain't it?

Here's the Los Angeles Times story about today's staggering development, complete with lots of photos of - well, what else? - red traffic lights.

Here's my previous blog post with more background. (And a photo of Jason Bateman, if you're into that kind of thing.)
Posted by Your escalator operator at 10:52 PM 6 COMMENTS

Email ThisBlogThis!Share to TwitterShare to FacebookShare to Pinterest
Labels: Only in LA, Pol star, They might be morons

Whichever side of the political spectrum you're on, it's easy to get riled up about the government these days.

On the national scene, Democrats, Republicans and Tea Baggers all all hate Washington because - respectively - Congressional leadership, the president and space-aliens-from-god-knows-where are out to run our country into the ground. In case you haven't seen it yet, a #F---YouWashington hashtag has been lighting up Twitter for the past few weeks, prompted mostly by this debt ceiling fiasco, which seems mostly to be an excuse for the ultra-tan John Boehner to get some extra broadcast time for his apparently limitless collection of unabashedly green neckwear.

Here in California, the state is something like $600 trillion in debt (I might be exaggerating a bit), the public education system is one of the worst in the nation and ... I imagine there are lots of other nasty problems, too, but the weather is so nice, who can complain?

The point is: We're all used to bitching and moaning about getting taxed to hell and screwed over by the jerks in federal and state government. That's old news. Somehow it seems worse when you learn that you've been getting royally hosed by your local government. People who are your neighbors. But another wonderful - and very creative - example of that came to light today in Los Angeles.

The city is deciding whether to discontinue its controversial red-light traffic camera program - where motorists get their photos taken by automatic cameras when they run red lights, and then have to pay a whopping fine, on the order of $480. The main issue being that although they generate a lot of tickets, they're not actually an effective traffic safety mechanism, which should have been the point.
Now, it turns out, those "fines" for running red lights weren't actually fines so much as they were, um, suggested donations. Today, in an L.A. Times blog post, the esteemed* city councilman Bill Rosendahl explains:


"The consequence is somebody calling you from one of these collection agencies and saying 'pay up.' And that's it. There's no real penalty in terms of your driver's license or any other consequences if you don't pay."

Yep. Turns out that the tickets were actually part of a "voluntary payment program." As in optional. As in, keep that horrible black-and-white traffic-camera photo, keep your money and treat yourself to a weekend getaway instead.

Which I'm guessing wasn't exactly made clear on the violation notices. And, which I'm guessing is going to be news to all of those people who assumed that the traffic tickets they got in the mail from the City of Los Angeles and that huge Amount Due were - how do I put this? - real.

Wonder what other Los Angeles fines and fees I've been paying that are actually voluntary payment programs. Only one way to find out....

* "Esteemed" in the same sense that the tickets seemed "voluntary."
Posted by Your escalator operator at 2:54 PM 8 COMMENTS

Email ThisBlogThis!Share to TwitterShare to FacebookShare to Pinterest
Labels: Only in LA, Pol star, They might be morons

If you live in or near Los Angeles, or if you're Twittered or Facebooked or LinkedInned with someone in L.A. - or if know someone who knows someone who acted in a movie with Kevin Bacon - chances are you've heard that a big portion of the 405 freeway is going to be closed next weekend.
Which isn't that big of a deal, except that about half a million cars use the route each weekend, including, most importantly, mine. And that - even when every lane is open - you can usually count on getting stuck in traffic.
In other words, it's going to be a complete and utter nightmare. (Well, either that or I'll just go to the beach.)
This city being the creative capital of the world, we've come up with a catchy name for the event: Carmageddon.
The Los Angeles Times covered it this way a few months ago, which was fine, except that the reporter made one observation that I found rather odd:
I don't play the lottery too much anymore. Do a lot of winning tickets have 11 picks? Or three-digit numbers? More to the point: Is there any possible way the writer could have made that potentially helpful information - alternate routes and bus lines for those who need to get around L.A. - any less useful? Thank you, L.A. Times. Thank you for nothing.
Which leads me to the main reason for this nugget of bloggy goodness. Despite the Times' best efforts, for those of us whose driving activity is going to be affected by the freeway closure, there really are only three ways to prepare. They are:
1) Leave Los Angeles for the weekend.
2) Stay extremely close to home for the weekend. (Which works for me, since "close to home" incorporates "beach.")
3) Outfit yourself properly, with one of the five following new t-shirts designed by S and J Market, the official apparel mart of SFTC. I give you: Carmageddon wear 2011, available for a limited time only!*
(Subtle plug: Click images to visit the S and J Market store.) 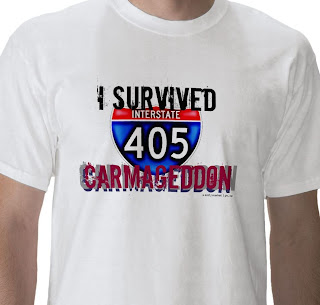 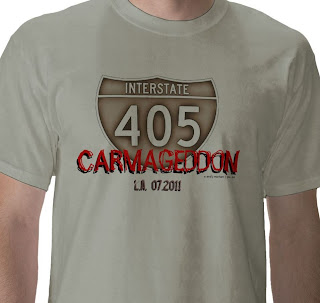 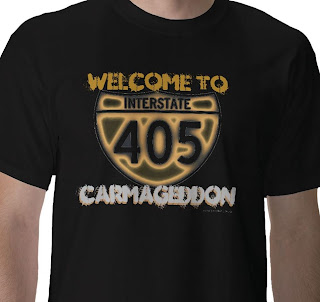 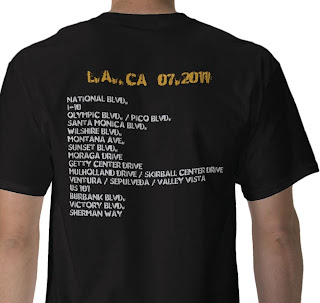 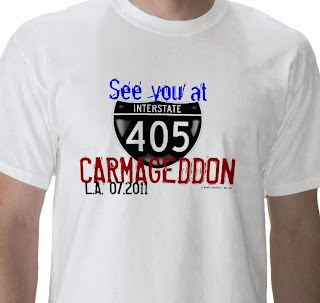 Don't live in L.A.? Pick up one or a few anyway! They're the ultimate mid-summer gifts/conversation starters. And you'll make me feel better about having spent a really long time designing apocalyptic versions of the 405 freeway sign. Win-win.
* Not really. I'll probably keep them posted until I sell a whole bunch more.
Posted by Your escalator operator at 10:35 PM 6 COMMENTS

Email ThisBlogThis!Share to TwitterShare to FacebookShare to Pinterest
Labels: Only in LA, Shirtstop, That's the news

In which Aimee Mann doesn't hate my suggestion

I read today on Facebook - rapidly, and sadly, becoming my go-to source for Important News of the World - that Tom Petty has a bone to pick with Michele Bachmann.

It seems that yesterday in Iowa, as Bachmann closed the kickoff speech for her soon-to-be-failed presidential bid, her staff played Petty's 1977 song "American Girl." Makes sense, what with her nationality and gender being properly reflected right there in the title. Of course, this didn't go over too well with Mr. Petty, whose political tastes run a little more toward the mentally capable. (Here's the L.A. Times recap of the incident.)

So I wondered: What would be a better - and somewhat more recent - pop song that would just as accurately summarize Ms. Bachmann's campaign and carry an equal measure of musical credibility? Two and a half seconds later, I had it.

Thanks to lightdarkens in the UK for letting me link to your YouTube video.

I thought this was a pretty good idea. So I thought I'd tweet the idea and see if Ms. Mann - of whom I've long been a fan - would see it.

Sure enough, a few minutes later, my BlackBerry buzzed. The highlight of my week, for sure.

Now, how do I get the Bachmann campaign on board?
Posted by Your escalator operator at 10:15 PM 6 COMMENTS

Email ThisBlogThis!Share to TwitterShare to FacebookShare to Pinterest
Labels: Don't stop believin', Pol star, They might be morons

My kind of town

What a weekend. What a city.

Several great meals, including a magnificent dinner at one of the best restaurants anywhere followed by an unexpected bonus: a tour of the kitchen (including a quick hello and thank-you to the executive chef) provided by an unbelievably gracious waiter. A lot of walking and public-transportation-riding. (Kinda forgotten how to do that in L.A.) A solo late-night photo expedition. A completely-worth-it 90-minute wait to get into the one-and-only Hot Doug's. A picture-perfect day for Cubs baseball at Wrigley Field, which, as my wife pointed out, "smells amazing." Reunions with a couple of very special friends. First encounters with, seemingly, dozens of new high-rises that have sprung up since I left just a few years ago, including the stunning Aqua (bottom photo). And, a return to the exact spot where my wife and I first met, five years ago.
Going to have to get back for another visit soon. If I'm lucky, I'll get a few more sights like these: 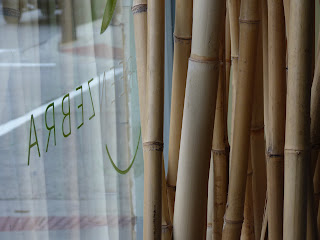 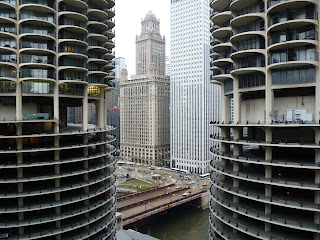 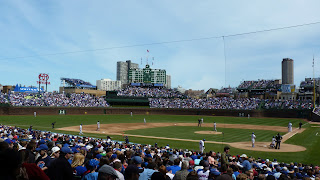 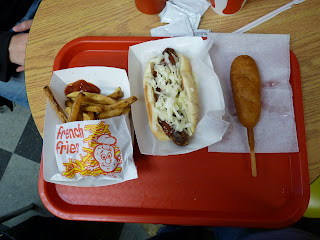 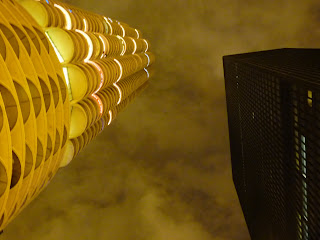 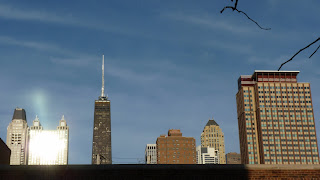 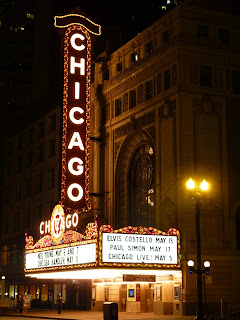 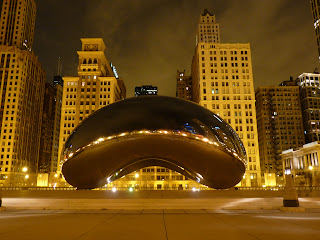 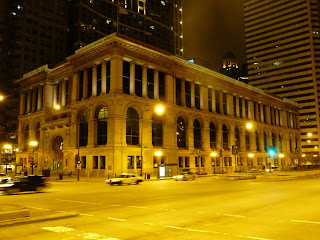 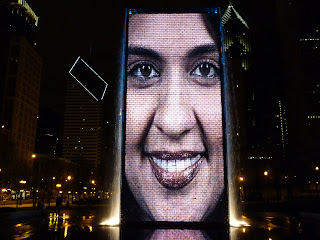 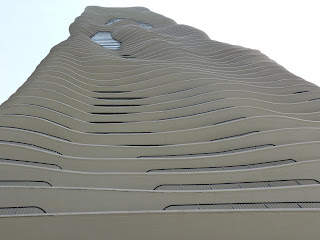 Posted by Your escalator operator at 10:28 PM 6 COMMENTS

Deep thought of the month, Number 1*

"Saying something and then repeating it won't necessarily make what you said any more profound. But it will make it rhyme."
- Me

I'm still working on the phrasing, but I wanted to memorialize it here. Because, you know, it's pretty profound. And I'm not sure it would fit on one of my hilarious T-shirts. Which are now available for purchase. In an array of colors and sizes.

* Likely to be Number 1 of 1. But who's keeping track?
Posted by Your escalator operator at 2:32 PM 4 COMMENTS

The few. The proud. The SFTC followers.

As if you needed to know more about what I'm doing...

As if you needed to know more about what I'm doing...

You should also visit

Get the official SFTC feed!

I get where you're coming from.